As half of "piece o' cake", I feel compelled to share the Cake Wrecks blog with you. Their byline, "When professional cakes go horribly, hilariously wrong" says it all. 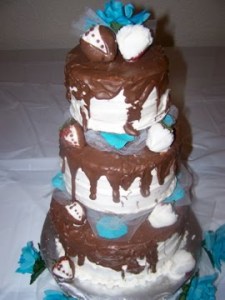 AND – more photos from Jeff and Celia's wedding are now up on Project Wedding!

Also seen at market were the fabric jewels made by Meg Hannan of Rag Sky Art Studio. She asked me to post this after November 1 after she got home from Festival.

OH MY! This posted before it was supposed to! Meg won't be back home and ready for you to order until November 1 so please check our her site then. Meg, I'm sorry to have jumped the gun!

I managed to resist enough to only buy one pair, but it was hard!

There is a park covering an underground parking garage in front of the George R. Brown Convention Center (home of market and festival). There was a series of art globes with an ecological theme in the park. They reminded me of the art cows from a few years ago. I walked in the mornings and saw most of the globes – but I didn't have my camera! I did manage to take these on one of the trips back and forth between the hotel and market.

I didn't get out much so took these photos on the run.

Nifty Thrifty Dry Goods, owned by Susan Gower, vends at both Market and Festival. You may have found her at a quilt show. This booth is always beautiful. Ribbons, trims, buttons, beads and more are arranged by color – it's a lovely rainbow of a booth. 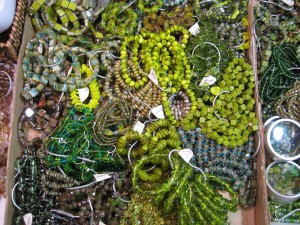 The Nifty Thrifty Dry Goods website is wonderful too!

Since we are authors, not quilt shop owners, we shop for different things at market. We look for interesting things to use in our quilts, new notions, and we shop for fun stuff!

Dusty's Vintage Linens had an amazing assortment of linen tablecloths, tea towels, hankies, etc. I found 2 sets of napkins that I am going to use and love. Dusty let me take a photo of her booth:

I have to tell you that I didn't realize that the tablecloth hanging above these towels was quilted until I saw the photo. (I'm pretty focused when I'm shopping.) What a good idea!

I always buy some earrings. These are from Geddes Studio. I couldn't resist the pendants either. Look for Nancy at http://www.Geddesstudio.com or email Geddesstudio@aol.com.

Susan Christie and Gail Sahara have the best vintage jewelry. These marcasite on sterling earrings make me smile!

…and I'm lucky to be alive! There was a lot of heavy rain on the drive home from Houston. Just south of Corsicana after coming out of some white-knuckle driving I was about to pass a van and I noticed mud flying into the air on the other side of the median ahead of me. In the space of 3-5 seconds a car slid, bounced a bit, and spun at least once, hitting the cables that divide the two sides of the highway. In that time I managed to slow and begin moving to the right (behind the van) – and then we were past it.

I don't think the person in the other car was hurt. Bruised probably, with a very sore body. But alive. If that barrier had not been there we would have hit head on and I would not be writing this. I am very happy and thankful to be home!

I've unpacked, started laundry, and downloaded photos for the blog. I took photos of our booth and a friend took some with me and Linda in them. Unfortunately neither of us look good at the same time so I am not going to share those. Here's 2 sides of our booth:

The other quilts from Applique Outside the Lines were on the side you can't see. Those of you who kept up with the wedding photos will recognize the cedar logs/flowers on the floor. I got to use them again! I'll post more tomorrow.

The 10-day online silent auction is all about bragging rights—and raising awareness and money to fight Alzheimer's disease.

The World Quilt Federation Smackdown quilts will be shown prior to the auction, for the first time anywhere, at the International Quilt Festival (IQF), Booth #4660, in Houston, October 14-18. In a gutsy move Smackdown promoter Ami Simms (a.k.a. Founder and Executive Director of the AAQI) will allow the Smackdown quilts to be purchased at the IQF. Each quilt carries a price tag of $10,000.

"I'm fully expecting all four quilts to be available for the November 1st auction," said Simms, "but I'm pretty sure the George R. Brown has a defibrillator on site just in case."

A Viewers' Choice component to the “Smackdown” will also be offered. Anyone wishing to support the work of the Alzheimer's Art Quilt Initiative can make online donations to the nonprofit in amounts as little as $5 beginning immediately, assigning their donation to one of the four quilts. One dollar equals one vote. The quilt amassing the most votes will win the Viewer's Choice Award. The Viewer's Choice Award donations have no bearing on the sale/auction outcome whatsoever. (from Becky – If you are there, please vote for me:-))

About the AAQI
The Alzheimer's Art Quilt Initiative (www.AlzQuilts.org) is a national, grassroots charity whose mission is to raise awareness and fund research. It auctions and sells donated quilts sponsors a nationally touring exhibit of quilts about Alzheimer's. The AAQI has raised more than $316,000 since January 2006. Ami Simms of Flint, Michigan is the founder and executive director of the AAQI, a 501(c)(3) nonprofit corporation operated entirely by volunteers. She is a quilter. Her mother had Alzheimer's.

*The World Quilt Federation is totally fictitious. Any similarity to professional wrestling is obviously intentional and all in good fun, although the winning quilter will receive this cute belt.

(I'd need a special outfit to go with the belt!)