This weekend Steve sent me a link to a marvelous commentary by Adam Frank. Mr. Frank talks about the benefits of noticing, especially nature. One benefit he mentions is stress reduction which I had not considered. To quote directly from the article:

In this permanent state of hyperventilation, the issue for us all is not stopping to smell roses. It's not even noticing that there are roses right there in front of us. Joseph Campbell, the great scholar of religion, hit the core of our problem when he wrote, "People say that what we're all seeking is a meaning for life. I don't think that's what we're really seeking. I think that what we're seeking is an experience of being alive." Steve, a field biologist, notices nature in exactly the way described in the article. I notice a lot, but not in quite the same way which for me is fine. I do know that when my eye is caught by something interesting, whatever is making me crazy fades into the background. Paying attention, noticing, places me in the minute.

Take a few minutes to read the article and then maybe go outside, take a deep breath, and look around! And then (and here's the trick) remember to do it again, often.

I didn't post much last week about the remodeling progress so thought I'd catch you up. This was last Wednesday in the bathroom. And here it is on Friday, end of the day. Luis ran out of the little white tiles for the decorative band and the shower floor tiles aren't in yet. Both should be here by Tuesday. It's hard to get a good picture, but in person it looks great! Orville took out the raised brick hearth in the living room. It's all gone now. I think Luis will be filling the front of the newly exposed brick with mortar and will lay the same tile that's now in the utility room on the concrete in front of the fireplace this week. Here's Miguel, grouting between the new tiles in the utility room, which is only feet away from the fireplace. A varitey of folks removed all of the Pergo flooring throughout the house – and they weren't all guys! There's a woman on the crew and she is a ball of fire! Everything was moving along at hyper-speed until we saw what was under the Pergo. Many years ago I put a decoupaged paper floor in the kitchen, breakfast room, entry and my studio. It was lovely and wore well but we got tired of it.

In about half the house, there is is the backing of the original vinyl flooring, stuck to the concrete. It's the whiter stuff in the photo below and it just does not want to come off. In some places I glued the paper bag floor to this vinyl backing. Oh my. It's all got to come up and it's slow, hard work. Lots of wetting and scraping. At one point at least 5 guys were scraping and they didn't get that much done. I think it's going to be at least 2 days of this before the new floor can be glued down. And the Bella flooring is here, in boxes, in the living room – right where Luis needs to work on the hearth. I'm guessing the boxes will be moving. I didn't say, but all of the popcorns are gone and those ceilings have been painted.

On Thursday, amid the chaos, I realized why my computer has been running so slowly. I've maxed out the hard drive! As the guy at the Apple repair place said, I can't get any more pencils in the box. It's time for a new, bigger box. Within a half hour I ordered a new, much bigger, mac mini. Sigh. If it's not one thing, it's another.

We are still waiting on Mom's neurosurgeon to call with information on a date for her shunt replacement. We have a follow-up appointment scheduled for Friday. Following up what, I'm not sure. So he can tell us again that she needs surgery? It makes my head hurt.

You know, waiting is easier if you have some clue as to why you are waiting and how long the wait might be. If they just came out and said that no matter how dire the straits are it's going to be a month until her surgery, I suppose we'd suck it up and do what needs doing in the meantime. But saying she needs the surgery (and he indicated sooner rather than later) and then leaving us dangling only makes me cranky. I am trying deep breathing but it's not helping, much. Perhaps you can deep breath for me. And say a prayer or two.

As I wrote that I realized that perhaps the remodel isn't getting to me because I have something bigger to worry about. Maybe it's all going to come together with a happy ending at about the same time. Sooner would be better than later :-). 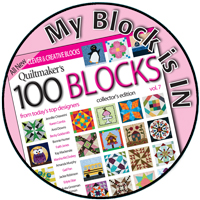 The blog tour begins at midnight – don't miss it! Click here to see what's new every day, through May 3.

My day is Thursday, May 2. I'll be giving away… well, you'll just have to check back for details on that :-).

Have you seen the Clover Pendant thread cutter? It's been around along time and is handy for hand sewing away from home. You can also use it when you are piecing. A student showed a neat way to use it to cut apart chain pieced units. Turn it upside down and insert the end in a spool… Or get a round, wood finial and drill a hole in the top of it. I think this one has also had a bit of its base sawed off… I gotta say, this works better for me than using scissors or a rotary cutter. I used it to cut apart the millions (well, not millions… it just seemed like millions) of HSTs that I made recently.

I wish I could remember the name of the wonderful quilter who both showed me this AND gave me my own wooden ball. I love it! And, because some of you may not have one of these Clover pendants, I've put them on my website. Click here and scroll down the page if you need one!

Those of you who have attended an Empty Spools seminar know how wonderful it is. If you've never been, let me tell you about it.

The 5-day seminars are held at Asilomar, a California state park on the Monterey Peninsula. Asilomar was first owned and operated by the YWCA in the very early 1900s. Click here to read more about the history.

Currently the site is both rustic and modern. The buildings retain their turn-of-the-century charm and the plumbing is contemporary – a perfect combination :-). There are no phones or TVs in the room which do help you to focus on both the beautiful surroundings and your class.

And the surroundings are truly amazing. Asilomar is on Highway 1 in a place where the traffic is light. I love to cross the highway and walk on the paths along the coast. Asilomar is one of my very favorite places to be. I actually calm down and breathe more deeply when I'm there.

As a student, you take one 5-day class. There are a variety of teachers and classes in each of the five sessions. I am teaching an Independent Study class in Session 3, March 14-19, 2014. The last time I taught this class there were quilters working on an amazing variety of projects and it was a very stimulating room.

I know that most quilters think of me as an appliquer and so might wonder how I could help them with a project that isn't applique. Surprisingly enough, my background in piecing, dyeing, painting, design and color is pretty deep. I very much enjoyed being able to help each person when they wanted me to. I also did my best to not 'help' when help was not wanted.

I have been a student at Empty Spools and I can tell you that it was wonderful! I spent 5 days with Ruth McDowell where I worked on this quilt, one of my favorites. I received my Empty Spools brochure in the mail today which means that sign-ups are underway. Classes do fill quickly so if you are interested click here for the Empty Spools main page. Click here for the registration form. It has to be printed and mailed or faxed. I would love to see you there!

My house is a vortex of activity. Honestly, you might not believe it if you were here. Rick has several crews and there are at least two crews at my house now. As Luis and Juan are toiling away on the bathroom, Roger, Carson, Miguel, and I'm not sure who else have been scraping popcorns and painting. Another crew may be working on the utility room where the current floor is being replaced with tile – or maybe that will be later today. Tile makes a lot more sense for that room and I don't know why we didn't tile it ourselves long ago.

I left at 9:00 AM to get my nails done (so that my hands look good on camera :-)) and came back to more plastic wrap. As the activity moves, so do the plastic drapes. I'm standing at the computer you see here. I'll be working on the design wall, that you can barely see the edge of on the right side of the photo, soon.

As they are whammering in the bathroom I'm moving the stuff on the shelves above my computer back so that nothing falls. These may be the only do-dads in the house that I didn't box up. Perhaps I should have. The bathroom was emptied out on Monday… On Tuesday, Luis and Juan made real progress… They framed out the shower, stubbed in the plumbing, and poured the sloped concrete floor for the shower. I just looked in and the Duroc is going up on the shower walls now. I don't know when the tiling starts. Maybe tomorrow if it's not on a truck somewhere, on its way to Sherman.

In other news, Mom (who is 81 today!) has been to see a neurosurgeon. She developed hydrocephalus and had surgery to insert a shunt 13 years ago. This condition is more common that you'd think and the symptoms are sometimes overlooked in older people. At any rate, her shunt isn't working and it took all of us a while to figure out that that was happening.

Dr Luis Mignucci was recommended and we saw him Monday. He indicated that surgery would happen soon, but soon to him and soon to me may be two different things. I'll keep you all posted as things happen. But for now, Mom is out having a birthday lunch, then it's a small birthday dinner tonight at our house, and a bigger party Saturday. At 81 you ought to be able to party more, don't you think?