My kids and grandkids loved the stacking cups toy by Fisher Price. Surely you've seen them – they were a simple shape and came in a stack of rainbow colors. The cups coule be stacked little to big or nested big to little? They had a pattern on the bottom that could be stamped into Play-Do. Well, those cups are gone and I have to say that the new cups are pretty wonderful. 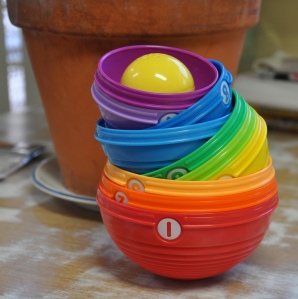 I ran across the new Fisher Price stacking cups and had to buy one for a baby. (Remember Theo, the beautiful baby? He got a set.) I also bought myself a set because I just love these things!

They are pretty! The cups are numbered which is educational and graphically nice. You can make balls which are fun to roll. Just ask Jack who has already given my set a test run. The little yellow ball makes noise when it moves.

The cups can be stacked and the little ball sits nicely on top.

The balls can be nested which makes this an easy toy to store – you end up with the one biggest ball and everything else inside. I have my ball out in the studio ready for those times when I just want to stack some cups or see the pretty colors :-).

We decided to have the tile on the waterfall wall next to the pool replaced. I've shown it before, it used to look like this:

The little glass tiles were lovely for a while but over the past year they have been falling off and the concrete has oozed calcium through the seams in several places. It was looking sad. This is much better:

Mom and I were sitting out by the pool before dinner on Sunday and we spotted this cardinal high in the tree across the alley. Isn't he a stunning color against the blue sky?

And there was a monarch butterfly flitting around the lavendar against the far fence. It must not be early for butterflies because there it was – but it seems early. The bumble bees and wasps are out and about here too. 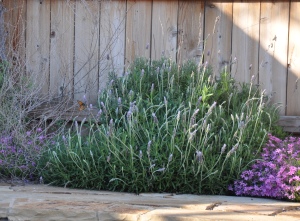 It never got cold enough for the asparagus ferns to freeze on our front porch. I have to say that they have never looked better! They are the only plant I've found so far that can make it through the heat of the summer on the front porch. This year I'm going to try a pot or two of periwinkles – I think they might make it.

The irises are about gone, the wild roses are coming on. The pansies and kale will get pulled up soon in favor of hotter weather flowers. The trees are greening up in a serious way!

I'm enjoying the way it all looks but it's also feels wrong. I'm not mentally ready for summer to be upon us.

Spring has sprung just about everywhere. In between everything else this weekend we did a little yard work. We put cardboard and mulch in mom's flower beds and I did some weeding in my front yard. There are a few houses, including our nextdoor neighbor, who got behind in their mowing. 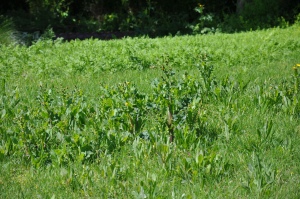 Oh my. Some of the dandilions were 18" and taller and were starting to go to seed. Luckily they got mowed Saturday afternoon but I keep finding dandilions growing amoung my other plants. They hide.

I had more than one variety of dandilion – some thorny, some not. They drive me crazy because if I let them go they'll choke out the plants that I would prefer to grow. So I made several of this sort of pile:

I also have some even sneakier weeds. I'm not sure what this is, although I suspect it's some sort of sweet pea. It seems to take over overnight. It's stems are delicate which makes it hard to pull. Can you see it peeking up through my lavendar? 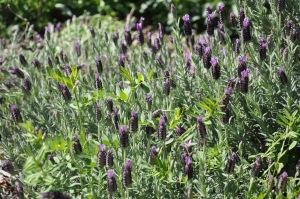 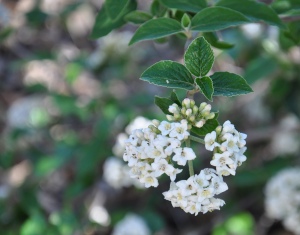 I'll show you some more tomorrow. If you are like me you need to get back to work!

I very rarely wade into politcal talk online. Let's be real – our country is pretty evenly divided on every important issue. That means that half of those of you who read my blog are more conservative than I am and half of you are more liberal. I myself am very much a moderate on almost every issue that seems to divide our nation.

What moves me to write now is the shooting of Treyvon Martin, and more specifically, my recent stay in LA. If you read my blog, you know that Steve and I and Elanor and Lola spent 24 hours in LA between flights. We stayed at a hotel near LAX which was in walking distance to a Ralph's grocery store.

On Sunday morning I needed fresh air and wanted to walk to the store to get food for lunch. I was assured that it was safe so I walked the two blocks to Ralph's. Let me tell you that it was cold and windy! Not LA-like at all.

It was early-ish on Sunday but there were still some folks on foot. The neighborhood seemed to have a mix of races and everyone was pretty focused on getting where they were going. Ralph's was nice and I enjoyed hearing the snippets of conversation as I was hunting gluten-free food for me and Elanor.

On the way back to the hotel, I was on the sidewalk walking well behind a black man. I'm 56 — he looked younger than me, but not by a lot. He was bigger than me and dressed informally, as was I. My hands were full. At this point I must add that I walk fast. I knew that I would overtake him before I got to the hotel.

I had time to think about what his reaction might be as he realized that I was coming up on him. I had time to realize that many white women in my position might have thought twice and slowed down. But I was not afraid because I honestly do not view males in general and black males in particular as a threat to me. We are all just people and most of us are nice and normal.

I did notice that he became more vigilant as I got closer. When we were even I said "hi", he said "how ya doing?" and I said I was cold! We lauged and both moved on. And ever since I've thought how sad it is that black men in particular have to be ever vigilant in ways that I as a white woman don't have to be.

If I was the parent of a black teenaged son I don't know how I would be, but I think I'd be more nervous than I was when my boys were younger. Our country should not be this way.

Our biggest news is that Jeff, youngest son, newly minted PhD, is going to be joining the faculty in the Biostatistics Department at Columbia University Mailman School of Public Health in New York City! Do you remember the commercial with the cowboy (or was it a movie with a cowboy?) and the way he said 'New York City!"? That's what I was thinking when I heard the news. I wish I could find that clip on youtube…

Update: Many thanks to Julia for telling me where to find the Pace Picante Sauce commercial that I couldn't remember! I've added it below:

Jeff and Celia and both very excited as are we. It's going to be lots of fun to visit them :-).

I've finally cleared the top of my desk. It won't last but I'm enjoying it for now. I'm about to go baste a quilt for a new book. I'm using a batt I haven't tried before: Mountain Mist Cream Rose.

It appears to be everything I want in a batt:

I had been using, and recommending, bamboo batting. I liked it but had made the switch
mostly for environmental reasons. Once I found out that there are concerns about the processing, I decided to switch back to cotton.

In other news, Steve and I are babysitting Jack for a couple of nights.

Christopher is attending a conference and Lorna went with him. Elanor is with Lorna's parents. Jack and I have been to Target to buy Star Wars figures and now he's mostly keeping himself busy with them. Which is good because I need to start basting that quilt once I sign off, which is now!

After my last post we went for a last walk in Lihue. I got this great photo of Steve and the girls by the fountain. On the walk back to the condo it rained on us – so typical of Kauai! Luckily we dried out before heading to the airport. 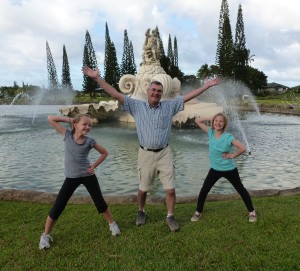 I use the Flight Tracker app and was notified as we were eating dinner that our flight out was going to be delayed by an hour. We knew we would miss our flight from LAX to Dallas before we even left the condo. I spent an hour on the phone with Angela at American Airlines. There were very few options. Monday morning Steve and Lola leave early early and fly to Phoenix, then on to Dallas, and then Lola goes on to Baltimore.

Elanor and I leave a bit later and fly through San Francisco to Dallas, arriving just a bit after Lola will have taken off for Baltimore. If all goes well, we'll be home tomorrow. There are thurnderstorms predicited for Dallas tomorrow – I hope they don't materialize.

There were a lot of people on our flight who missed connections. Some were luckier than us and managed to get out on Sunday. Others were less lucky. We at least had a plan and found a hotel so did not spend any time hanging around hopelessly at the airport. Instead we're hanging out at a Comfort Suites that was nice enough to let us check in really early. The girls are watching the Discovery Channel. The shark shows were good. I'm not loving Doomsday Bunkers – but the girls think it's full of good tips. 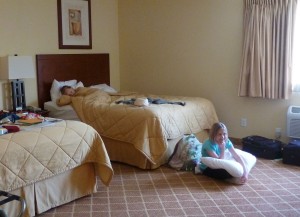 As it turns out we're too tired to go out and about. Lola has had a nap. I had to wake her up so she didn't sleep the day away. I admit to being tempted to nap myself but we all have to readjust to the time. In some ways this little stop is easing us back into our own time zones. Our flights are early tomorrow, there just didn't seem to be a good reason to rent a car today. So, here we are. Perhaps tomorrow we'll be home!